After a fairly successful soundbar in the form of Ray-Danz, also known as TS9030 , TCL has got blood on its teeth, and now comes with several new soundbars.

With the TS8111, TCL caters to movie lovers who want “immersive home cinema in the living room”, without having to resort to a large home theater system. Dolby Atmos surround sound with a sense of sound from above is simulated thanks to a total of six speaker elements, two of which are located on top of the soundbar and direct the sound up to the ceiling. The soundbar does not have an external subwoofer, instead it has two built-in bass elements to reproduce the deepest tones. 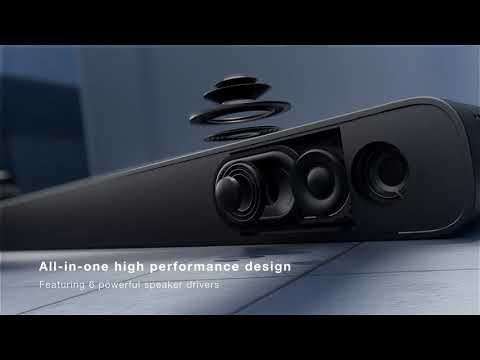 The TS8111 uses digital audio processing (DSP) to simulate surround sound. Although this normally leads to a sweetspot, where the person in the middle gets the best experience of surround, TCL promises that with the TS8111 you will get the same surround impression no matter where in the room you sit.

TCL promises to a large extent that we will get real cinema experiences from the soundbar, which is a bit to take in when talking about a soundbar for 300 without an external subwoofer. But we’re excited about how good it actually sounds. Music can be streamed wirelessly via Bluetooth.

If you want to spend even less money on a soundbar, and also want an external subwoofer as well, TCL has the answer in the form of TS6110. Here you get a full package for only 199, including HDMI output with audio return from the TV (HDMI ARC). This simply means that you get the TV sound out of the soundbar through an HDMI cable. When HDMI is connected, the soundbar automatically turns on and off with the TV. This is not unique to the TS6110, most soundbars have this feature, including the TS8111.

The speaker elements are oval-shaped, to get the most possible surface from a modest height, and the subwoofer should give extra guff in the bass. The TS6110 also has Bluetooth for music.

If, on the other hand, you do not need the subwoofer for the TS6110, then you can look in the direction of the TS6100. Same soundbar, but without the subwoofer for only 149 bucks. A pure 2.0 channel soundbar, as TCL promises, gives a better sound than you normally get from the TV. This also has wireless Bluetooth.